Storing the data in this format has a lot of advantages. But very soon, we heard a variety of use cases from our customers which couldn't fit our standard data model. For example - Marketers wanted to see the performance data of Device, Country, Operating System, Genders, Age etc. A sample of this data would look like this -

To import such data which doesn't have any inherent hierarchy or levels, we built a general data framework which could store the data in a semi-flat format. We call it POD,  The data model of POD is as shown below: 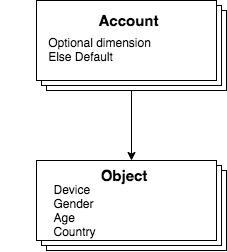 There are only 2 levels in a POD data, Account and Object; and all the dimensions such as Device, Gender, Age, Country (from the sample file above) are stored at the Object level. Additionally, any one dimension from the file can also be mapped to the Account level. If mapped to Account, then a new account is created for each dimension value of the mapped dimension. You can use Account mapping if the data has some hierarchy. Say in the above data, if the marketing activities are divided between the two countries - US and UK, then you can map Country to Account. This will be then helpful while setting up user-access control in your Clarisights account.

The following are the various ways in which data can be imported into a POD data source:

The data should be in a flat-file format only to import into POD data source. 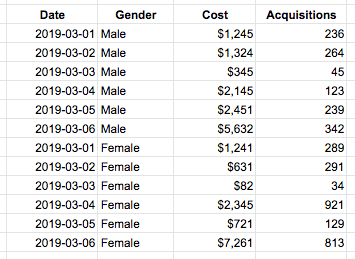 The same data on the top can be arranged in the following table format where Gender has taken a precedence in the hierarchy.

The above file format is not a flat file and can't be imported in Clarisights.

The data should contain some standard headers. The following list of headers and their formats are described below. The once marked with (*) are required.

1. timestamp* - The date to which the data should be attributed.
The following timestamp formats are supported:

Note: If no timezone information is given, we will parse the timestamp in your company's timezone.

2. Dimension columns
Any columns of type string from the file is a dimensions.
Example - Device, Gender, Country

3. Metric columns*
Any column of type integer or float in the file is a metric.
Example - Cost, Acquisitions

You can also add any filter on your data before importing it in Clarisights. For example, from the sample data above, if only data of Male  has to be imported in POD data source, a filter Gender  = Male  can be applied to the data. Then all the rows where Gender  is not equal to Male  won't be imported.
Please reach out to our support team in case you add a filter to you POD data source.

Learn how to create a POD data source in Clarisights.